The Science of Odor

The Science of Odor

Our sense of smell—like our sense of taste—is part of our chemosensory system, or the “chemical senses”. In order for us to smell a particular thing molecules from that thing must make it into our noses. We can smell things because those things that we smell are constantly giving off molecules. More precisely, molecules are escaping from that thing and the reason they’re escaping is because they are what we refer to as “volatile”. Volatile in this context means that they evaporate easily i.e., they go into a gaseous (vapor) state with little to virtually no energy input into them. A more scientific way to word it is to say that they have an extremely low boiling point. Once the molecules are in a vapor state they can make their way into our noses.

The ability to smell comes from specialized sensory cells, called olfactory sensory neurons, which are found in a small patch of tissue high inside the nose. These neurons are unique in that they are effectively out in the open and in contact with the air.  These cells connect directly to the brain and each olfactory neuron has one odor receptor. Vaporized odor molecules (chemicals) floating in the air reach the nostrils and dissolve in a thin layer of mucous membrane called the olfactory epithelium. Once the neurons detect the molecules, they send messages to your brain, which identifies the smell. There are more smells in the environment than there are receptors, and any given molecule may stimulate a combination of receptors, creating a unique representation in the brain. These representations are registered by the brain as a particular smell. 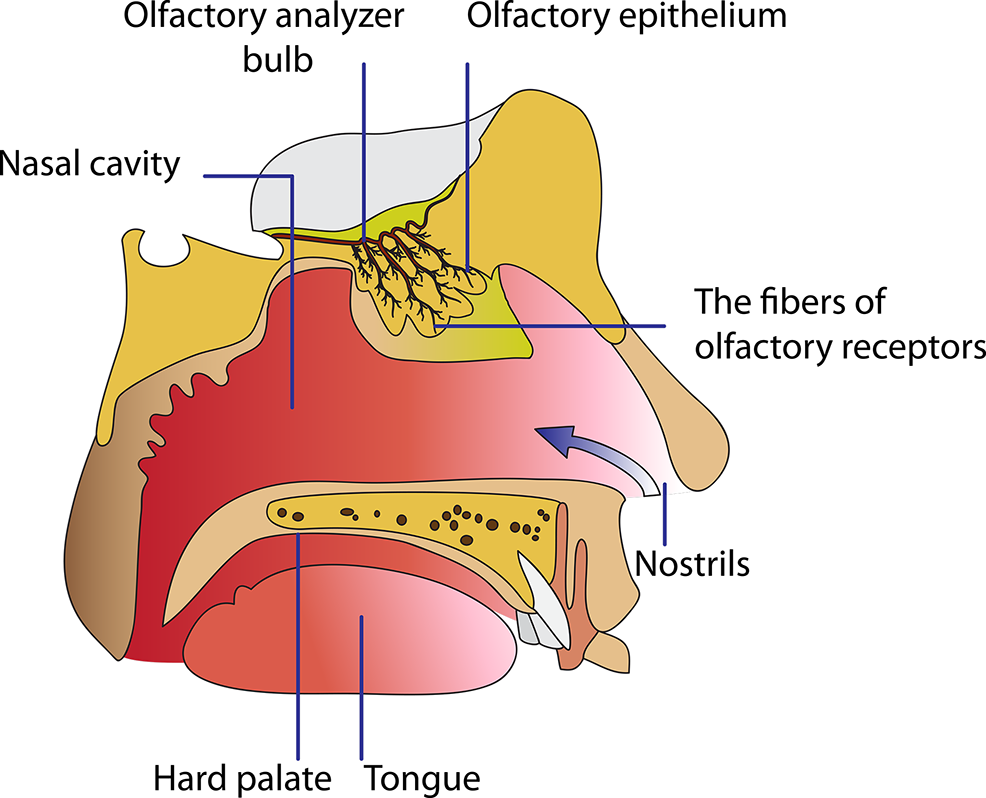 An example of a smell that is easily appreciated is that of esters. Esters are chemical compounds responsible for many of the odors we encounter daily. We could say that the chemical compound ethyl formate (C3H6O2) sure reminds us of Hawaii… or we could just say it smells like Pineapple.

Smells reach the olfactory sensory neurons through two pathways. The first pathway is through your nostrils. The second pathway is through a channel that connects the roof of the throat to the nose. Chewing food releases aromas that access the olfactory sensory neurons through the second channel. If the channel is blocked, such as when your nose is stuffed up by a cold or flu, odors can’t reach the sensory cells that are stimulated by smells. As a result, you lose much of your ability to enjoy a food’s flavor. In this way, your senses of smell and taste work closely together.

Your sense of smell is also influenced by something called the common chemical sense. This sense involves thousands of nerve endings, especially on the moist surfaces of the eyes, nose, mouth, and throat. These nerve endings help you sense irritating substances—such as the tear-inducing power of an onion—or the coolness of menthol.

The limbic system is a network of connected structures near the middle of the brain linked within the central nervous system. These structures “work together to affect a wide range of behaviors including emotions, motivation, and memory” (Athabasca University-Advance Biological Psychology Tutorials). This system deals with instinctive or automatic behaviors, and has little, if anything, to do with conscious thought or will. It is through the limbic system that from day one of our lives we begin to associate feelings and emotions with smells.

Page load link
We use cookies on our website to give you the most relevant experience by remembering your preferences and repeat visits. By clicking “Accept”, you consent to the use of ALL the cookies.
.
Cookie SettingsAccept
Manage consent

This website uses cookies to improve your experience while you navigate through the website. Out of these, the cookies that are categorized as necessary are stored on your browser as they are essential for the working of basic functionalities of the website. We also use third-party cookies that help us analyze and understand how you use this website. These cookies will be stored in your browser only with your consent. You also have the option to opt-out of these cookies. But opting out of some of these cookies may affect your browsing experience.
Necessary Always Enabled
Necessary cookies are absolutely essential for the website to function properly. These cookies ensure basic functionalities and security features of the website, anonymously.
Functional
Functional cookies help to perform certain functionalities like sharing the content of the website on social media platforms, collect feedbacks, and other third-party features.
Performance
Performance cookies are used to understand and analyze the key performance indexes of the website which helps in delivering a better user experience for the visitors.
Analytics
Analytical cookies are used to understand how visitors interact with the website. These cookies help provide information on metrics the number of visitors, bounce rate, traffic source, etc.
Advertisement
Advertisement cookies are used to provide visitors with relevant ads and marketing campaigns. These cookies track visitors across websites and collect information to provide customized ads.
SAVE & ACCEPT
Powered by